Tracking in the dark: shedding light on bat behaviour for conservation

Livingstone’s flying fox Pteropus livingstonii is a large black bat endemic to Anjouan and Mohéli, two islands of the Comoros archipelago. There are only around 1,200 individuals left in the wild. This makes them difficult to find and study in their natural habitat, where they prefer to roost in small colonies above 900 m elevation. Against the odds, the population perseveres in a severely degraded landscape. The Comorian forests have been largely decimated and the condition of remaining forest fragments has deteriorated as a result of agricultural activities and tree felling. The climb to one of Anjouan’s most accessible roosts leads through a series of fields and agroforestry patches—the roost itself is in a small assembly of large, old-growth trees, surrounded by more fields. Habitat loss, driven by complex socio-economic and demographic factors, is the main threat to the survival of these bats.

The local NGO Dahari has been working to halt and counteract the ongoing landscape degradation. Together with local communities they strive to improve livelihoods and protect Anjouan’s endemic flora and fauna. Since 2015, they have been using a Payment for Ecosystem Services (PES) scheme to protect Livingstone’s flying fox roost sites, collaborating with landowners to prevent tree-felling and encourage reforestation.

Although roost sites are some of the most important resources for bats, little is known about the other ecological needs of the Livingstone’s flying fox. To improve our knowledge of this species and to identify conservation actions, Dahari and the University of Comoros launched a pilot GPS tracking project in 2019. Two individual bats were equipped with e-obs GPS data loggers that collected their movement data for 10 months. The data helped identify potential new roost sites as well as feeding locations. Interestingly, some of these feeding sites were not located in forests as expected: the bats fed at large trees that had been left standing in agricultural areas. The data showed that the bats frequently switched roosts during the study period and engaged in some exploratory flights close to villages.

A Livingstone’s flying fox is fitted with a GPS data logger. The devices are solar-powered, and thanks to the cathemeral nature of these bats, recharge whilst attached, providing long-term data. The collars were designed to fall off after a maximum period of 10 months. Photo: Isabella Mandl

When cyclone Kenneth hit Anjouan in early 2019, one of the bats was still carrying its GPS logger. The data showed where the bat sheltered from the cyclone, and how it used the landscape in the days following the devastating storm. As cyclones are common occurrences in flying fox range areas, this type of information may help identify important landscape features that allow small Pteropus populations withstand natural disasters.

On Anjouan the insights gained through the detailed tracking of flying fox movements are now being integrated into applied conservation decisions, such as which areas to target for conservation and restoration. Dahari are working on expanding the PES scheme to protect all known roost sites and preserve surrounding buffer zones. Further GPS tagging is planned, once conditions allow, to keep driving the conservation of this species forwards. 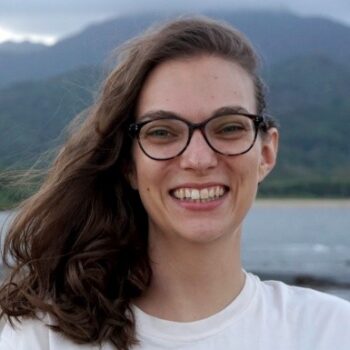 Dr Isabella Mandl is a wildlife and conservation biologist who has worked for the NGO Dahari since 2018, co-managing the ecology research team. She led the study on Livingstone’s flying fox movement behaviour in 2019 and has been an active member of the IUCN Species Survival Commissions Bat Specialist Group since 2020.