Plight of the pangolin: hunting and illegal wildlife trade are pushing the scaled anteater to the brink of extinction

Pangolins are a family of eight insectivorous mammals distributed across tropical and subtropical Africa and Asia. Their long tongues and protective scales make them uniquely adapted to feeding on ants and termites. Hunting and wildlife trade have severely affected pangolins worldwide over the past few decades: seven out of the eight species are either Endangered or Critically Endangered. Pangolins are the most trafficked animals globally. According to a 2018 report by TRAFFIC-India, close to 6,000 pangolins were seized from illegal trade involving India during 2009–2017. The two pangolin species that occur in India (the Chinese and Indian pangolins) are widely hunted for their meat, skin and scales. Despite this, little is known about pangolins from the subcontinent, and only a handful of studies have recorded their presence in the wild. This lack of information is seriously undermining any conservation efforts targeted at population recovery.

In this study, we tried to understand what factors are driving pangolin hunting and trade. We focused on the Eastern Ghats, a forested hill landscape in southern India, specifically the region around Papikonda National Park, the area’s only National Park. This is a dynamic landscape comprising several forest types, agricultural lands and plantations, as well as villages and towns.

Through our research we gathered some interesting insights into how people identify, hunt and trade pangolins. Most people use traditional hunting methods such as bows and arrows, as well as dogs, which are a popular hunting aid. Local communities mentioned that hunting of pangolins has increased as a result of a surge in demand. Although a small per cent of people have stopped hunting, there is still a need for more awareness at the grassroots level, as well as for studies on how hunting and trade affect pangolins throughout their range.

The COVID-19 crisis has put the spotlight on zoonotic diseases—infections that can be transmitted between animals and humans. In particular, the pandemic has highlighted the role of bats and pangolins as reservoirs for coronaviruses. Ongoing studies suggest that the SARS-CoV-2 virus could possibly have emerged from bats, with pangolins as intermediate hosts before infecting humans. This has unfortunately resulted in several bat colonies being targeted and destroyed by misinformed individuals. It is important to remember that pathogens are species specific and do not normally jump from animals to humans. Hunting and illegal wildlife trade, consumption of wild meat, destruction of natural habitats, and climate change all create favourable conditions for bringing disease-causing pathogens into close contact with humans. Despite global lockdowns, poaching and trade in pangolins have experienced a recent spike with several new reports of pangolin hunting surfacing in the past 2 months.

Left: A rescued Indian pangolin awaiting release at a Forest Department office in Andhra Pradesh, India. Right: a scale of a hunted pangolin.

Following on from this, we are working on a project to map the distribution of the Indian and Chinese pangolins across India. We plan to use predictive modelling to map their distribution under various environmental conditions, and to assess patterns of trade and hunting across India. The future of pangolins, as with many threatened species, looks bleak. We hope our work will help raise awareness of their plight and contribute to their survival.

Bison hill, a peak inside the Papikonda National Park.

The article Integrating camera traps and community knowledge to assess the status of the Indian pangolin Manis crassicaudata in the Eastern Ghats, India is available in Oryx—The International Journal of Conservation. 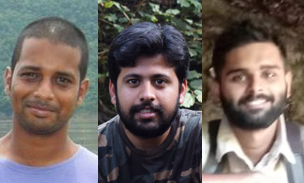 Vikram Aditya currently works as a postdoctoral research associate in the Government of India funded National Mission on Biodiversity and Human Well-being at the Ashoka Trust for Research in Ecology and the Environment. His research interests include mammal diversity and distribution patterns in tropical forests, hunting and wildlife trade and community involvement in conservation.

Krishna Pavan is an independent researcher, interested in studying amphibians in human-altered landscapes. Currently, he is trying to understand the consequences of habitat conversion on microhabitat selection in terrestrial frogs and toads. He is also a recipient of the Ravi Sankaran Inlaks Fellowship.