Hawaiian land snails are recognized not only for their spectacular diversity (> 752 species) and beauty, but also because they are highly threatened (Fig. 1). Tragically, most Hawaiian land snail species are already extinct with current extinction rate estimates ranging from 30–100% depending on the family. Smaller, arboreal snails that primarily live on plants have fared better than ground-dwelling species and the larger, charismatic Oʻahu tree snails. However, we lack the baseline ecological data needed to make informed conservation recommendations for the extant species. Prior to our research, critical habitat requirements, such as which plants are necessary for snail survival, were unknown for these arboreal snail species. Identifying which plant species are preferred hosts for arboreal snails is essential for determining which plant species may facilitate the preservation of Hawaiian snail diversity, and for understanding how changes in native plant species abundances and distributions may influence remaining snail populations.

Fig. 1 Iconic endemic Hawaiian land snails: (a) Achatinella sowerbyana, one of only nine of the 42 species in the genus Achatinella, the well-known Oʻahu tree snails listed as endangered under the Endangered Species Act, that remain; (b) Laminella aspera, one of 21 of the 325 amastrid species that remain, and (c) Endodonta christenseni, one of only three endodontid species out of an estimated 300 species that remains from this family. Photo credit of A. sowerbyana and E. christenseni to David R. Sischo, Hawaii Department of Land and Natural Resources. Photo of L. aspera by Norine W. Yeung, Bishop Museum.

To fill these knowledge gaps, we have previously studied the plant preferences of native arboreal snails in wet forests on the islands of Hawaiʻi and Oʻahu, and now in Puʻu Kukui Watershed Preserve, a wet rainforest on west Maui (Fig. 2). Our research team consisted of: scientists from the Bishop Museum; researchers from several US institutions who arrived early for the 2018 American Malacological Society Annual Meeting; Hawaiian high school students interning at the Bishop Museum; and conservation practitioners from Maui Land & Pineapple Company, who manage the Preserve (Fig. 3).

Our team surveyed nine 5 x 5 m sites over 2 days at Puʻu Kukui Watershed Preserve. To determine plant preferences of each snail species we first surveyed plant assemblages at each site to determine the relative abundance of each plant species. Following these surveys, we examined every plant to see whether there were snails present (Fig. 4). Preference was determined when we found more snails on certain plants than expected by chance (i.e. the relative abundance of snails on a plant species was higher than the relative abundance of that plant). In addition to determining plant preferences of snails in the Preserve, we also compared these data to previous studies by our team on other Hawaiian Islands, to examine any shared preference patterns. 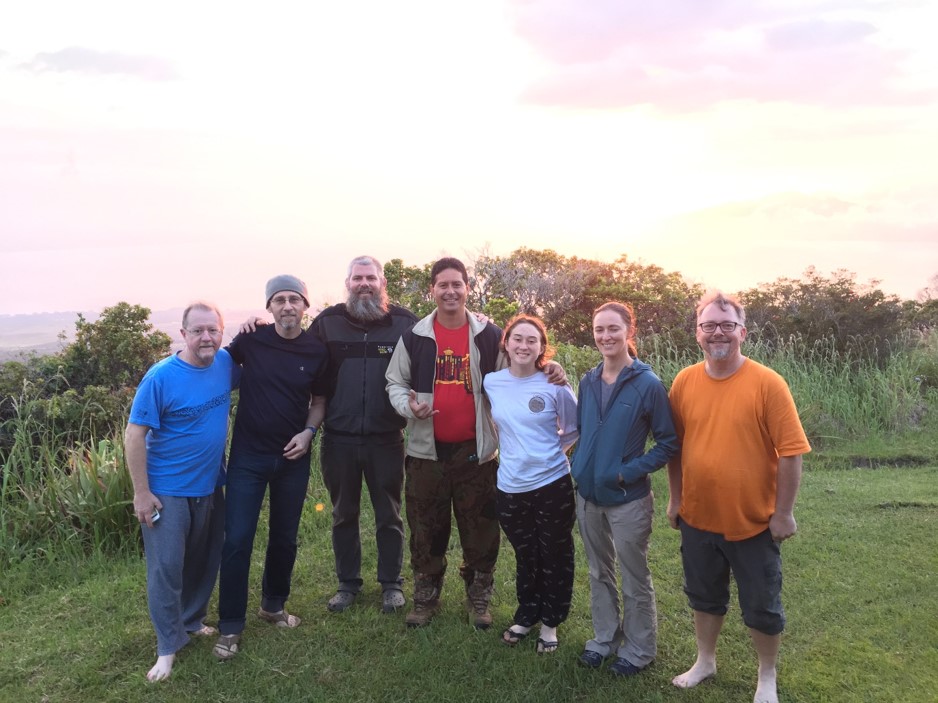 Our findings were consistent with results from other islands. Native arboreal snails in Puʻu Kukui Watershed Preserve preferred a small subset of understorey plants, rather than the most widespread and abundant tree and mid-canopy fern species found on all three islands. Furthermore, despite our studies including island endemic snails from multiple evolutionarily distinct families, we identified a consistent preference for one key understorey plant Hydrangea arguta (Fig. 5). Combined, these findings underscore the critical need for native understorey plant species, particularly H. arguta and others preferred by snails, and that ecosystems devoid of these native plants may not support many of the extant native snails. The extensive efforts required to preserve both endemic plants and snails are emphasized by the rapid reductions in the ranges of many native plants over the last century and the loss of understorey assemblages as a result of the activities of invasive pigs in forests that are not vigilantly protected from pig incursion.

Fig. 4 An overview of a survey: (a) note takers and snail identification experts are on the boardwalk (b), and plant and snail surveyors are in the plot (c). Photos: Connor Kalahiki

We hope this study helps spur future research examining plant conservation and restoration efforts for the benefit of native Hawaiian land snails and other terrestrial invertebrate species. We also hope it motivates others to help fill gaps in the baseline ecological knowledge required for making informed conservation decisions. Our study incorporated an inexpensive and tractable approach to collecting the data required for understanding the interactions between snails and plants. Understanding and preserving these critical interactions is a priority for biodiversity conservation. 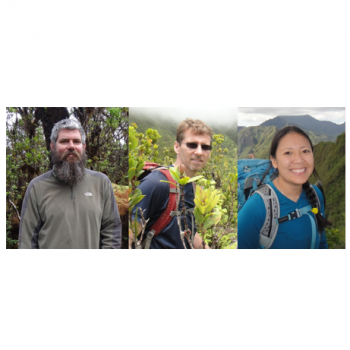 Wallace Meyer was a co-Principal Investigator on this research project and is an ecologist at Pomona College, USA.

Norine Yeung is the Senior Curator of Malacology at the Bishop Museum and served as a co-Principal Investigator on this project.

Kenneth Hayes is the Director of the Pacific Center for Molecular Biodiversity and an Invertebrate Curator at the Bishop Museum. He was a co-Principal Investigator on this project.

Wallace, Norine and Kenneth have been collaborating for nearly 2 decades to inform conservation of Hawaiian land snails and invertebrate biodiversity more broadly, and to increase capacity for this through the training and engagement of students of all ages.