Asking about wildlife use in Keo Seima, Cambodia

Nestled in Mondulkiri province, one of the least populated areas in Cambodia, Keo Seima Wildlife Sanctuary is home to an array of wildlife, including the Critically Endangered yellow-cheeked crested gibbon, Asian elephant and rare wild cattle such as banteng and gaur. Yet, as in much of South-east Asia, the wildlife here is threatened by human activities such as hunting, deforestation and forest degradation. Previous research has suggested Cambodia has one of the highest prevalences of wild meat consumption, yet studies detailing why people eat wild meat, and how they access it, are few and far between. Our research aimed to find out more about who hunts, why and how.

Left: A typical village dog, owned by many households living in Keo Seima. Right: Increasingly patches of forest are being cleared to grow more cash crops.

As a team of four, we traveled by motorbike to 20 villages situated within the Wildlife Sanctuary. Using a household questionnaire, we asked people about wildlife, how they used it, and their knowledge of the protected area rules. When researching hunting, people are often afraid to reveal the truth for fear of getting into trouble. In Cambodia, hunting wildlife within a protected area is illegal, with rangers regularly patrolling villages and the surrounding forest. If caught with wildlife, people may face confiscation of equipment, fines, arrests and even imprisonment. To overcome this challenge, we adopted a specialized questioning technique known as the Unmatched Count Technique, which enables respondents to answer sensitive questions honestly but does not require them to directly report if they do the activity. By using this method, we hoped to derive reliable estimates of hunting prevalence than could be achieved by asking people directly. 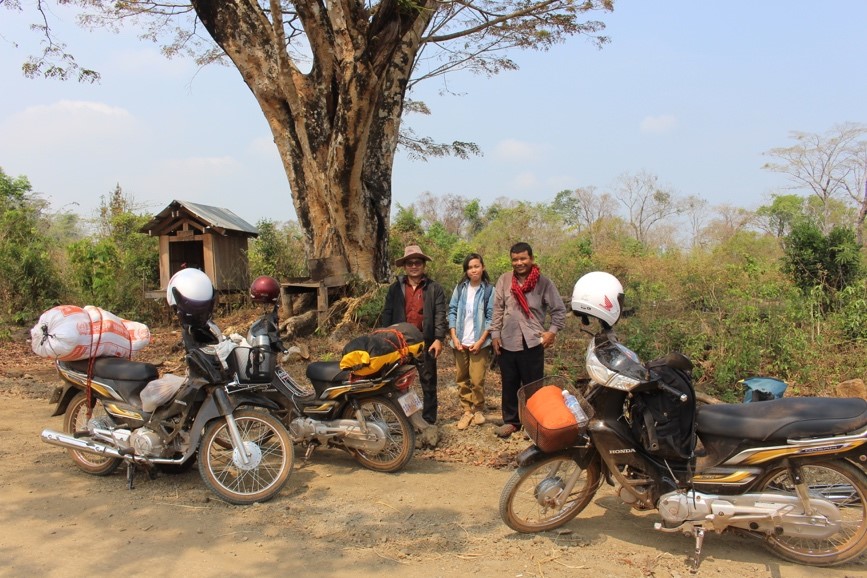 All travel was conducted by motorbike, carrying all our food and equipment.

So, what did we find? Firstly, results from the Unmatched Count Technique survey were inconsistent, producing both negative and positive estimates of prevalence. As a result we had to abandon these data. However, people were often willing to talk about hunting without the use of more complicated methods. Using data obtained from asking people directly we found that local communities do hunt, but that hunting over the previous 5 years had declined. In the last 30 years, market integration, improved infrastructure and loss of forest to industrial agriculture has fuelled livelihood changes, with people now favouring the farming of cash crops such as cassava and cashew over traditional activities such as resin collecting. As a result, people said they go to the forest less often and thus have fewer opportunities and are losing their hunting skills. Moreover, local communities reported that wildlife populations had declined, and it was now much harder to hunt. 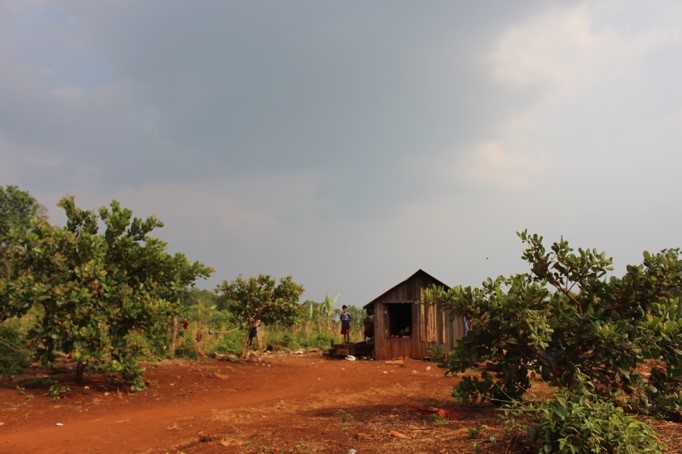 A house surrounded by cashew trees, planted for cash crops.

Prior to our research, snares were thought to be widely used by local communities, but our findings suggest that few local people actively use snares to hunt in the forest. Snares are more commonly used around fields and near villages to protect crops such as rice, vegetables, cassava and cashew from being eaten or trampled by wildlife. Unexpectedly, our research highlighted that hunting by dogs may be problematic. We estimated that c. 4,100 dogs may live in the Sanctuary. We also found that animals such as monitor lizards, chevrotain and wild pig were widely, but not regularly, eaten by people and that the main incentive for consuming wild meat was because it was perceived as healthier and tastier than domestic alternatives. 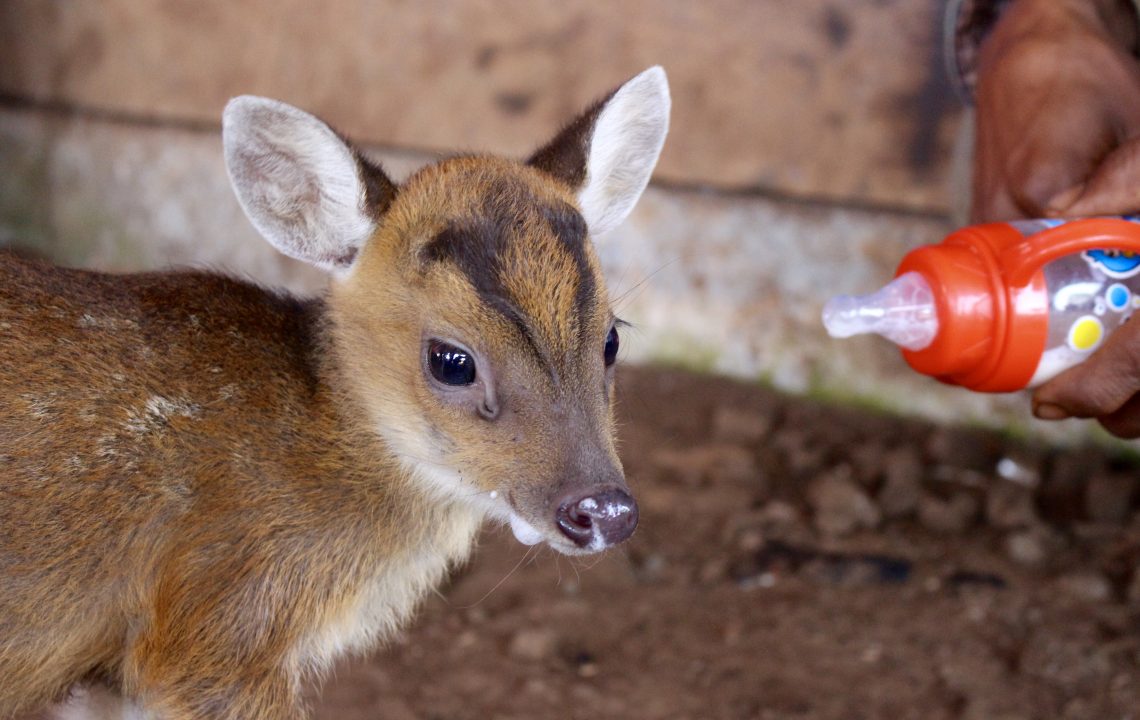 A Red muntjac fawn which was brought back to a village, after it was believed to be abandoned in the forest.

As part of our research we also asked about rules regarding wildlife use. Local communities described having mixed relationships with rangers. Although some described how rangers would occasionally let them keep wildlife if they explained the need to feed their families or that they obtained it unintentionally when their dog caught it, others reported the inconsistency of penalization, with rules enforced differently for ‘small people’ (i.e. villagers) compared to ‘big people (i.e. those in power), particularly for lucrative activities such as logging. 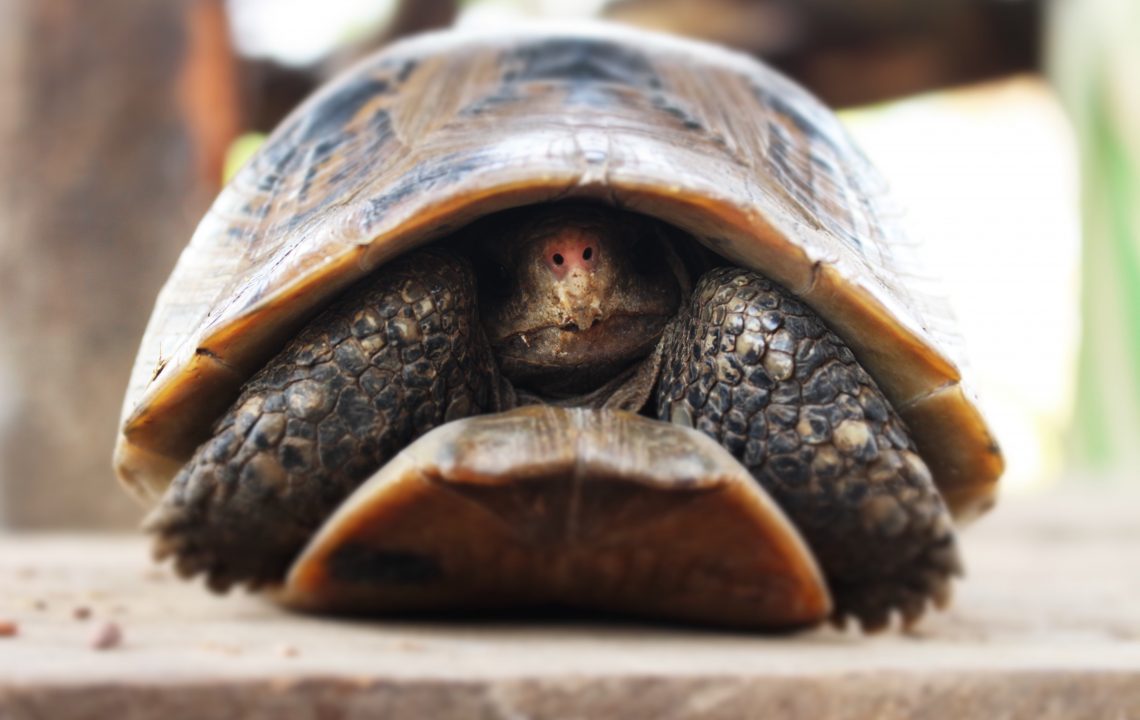 Communities in Keo Seima often find wildlife in the forest. Photographed here is a tortoise (which are often found and killed by dogs).

Over the last few months COVID-19 has thrown wildlife trade into the spotlight, with many calling for the closure of wildlife markets. In Keo Seima selling wildlife is illegal, but many still reported buying wildlife to eat. Some reported that traders smuggle meat under motorbike seats or trade in secret at night. Instead of calling for bans on wildlife trade and use, more nuanced perspectives that attempt to understand the reasons why people consume wildlife are needed. Our research highlighted just how difficult it can be to ask sensitive questions in conservation, and that there is an urgent need to critically examine the benefits and limitations of the social science methods we implement before investing limited conservation resources in their use. 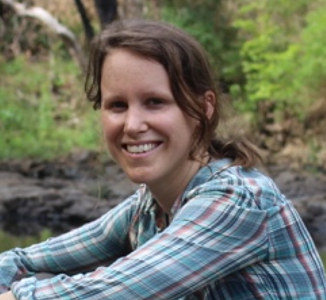 Harriet Ibbett is currently a Doctoral Researcher in the Conservation and Human Behaviour lab in the School of Natural Sciences at Bangor University, Wales, UK. Her PhD focuses on critically examining social science methods to improve understanding of rule-breaking in protected areas in Tanzania and Indonesia. Prior to starting her PhD, Harriet worked at the Interdisciplinary Centre for Conservation Science at the University of Oxford, on a project that investigated hunting behaviour, particularly the use and detectability of snares, in eastern Cambodia.