Are we counting the wrong costs? Pots and pans, sleepless nights and elephant visits in rural Bangladesh

A torchlight and soft mumbling woke me up on a hot and humid night. “Hati, Hati!” my friend exclaimed in Bengali. The words caught purchase in my wakening mind—elephants! As I pulled on my lungi—a traditional South Asian skirt-like garment—I was ushered into the enclosing darkness, broken only by thin beams of light. I noticed the whole village astir with people brandishing an assortment of pots, pans and other unidentifiable kitchenware. We soon came upon the unfolding scene. Before us was a three-acre field, behind which lay the silhouetted jungle, visible only when the brightest of torches illuminated its branches. The light beams, however, were focused on a group of seven adult Asian elephants. They were swiftly making a meal of the young rice paddy, which explained the villagers’ abrupt awakening. 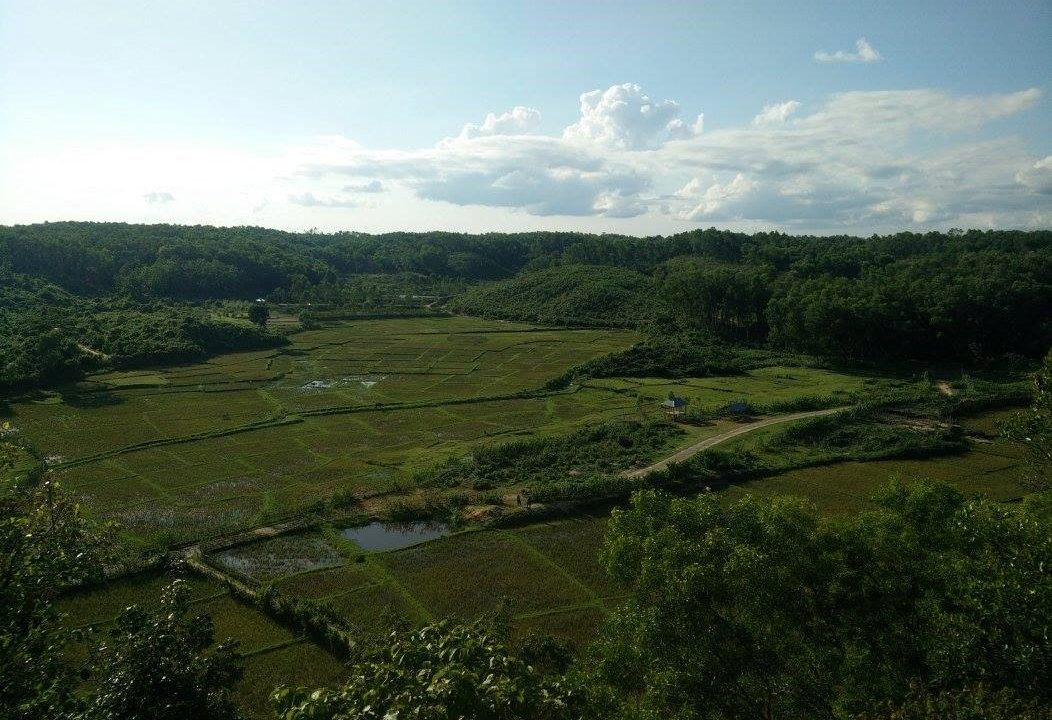 A political ecology vista: The rice paddy in the foreground is in Bangladesh, with the furthest visible forests being across the border in India and the start of the Meghalaya cloud forest.

The paddy is vital to the villagers, who sustain themselves on its rice come autumn harvest; they were understandably trying to defend it. It took a group of 30 or so women, men and children about 30 minutes of continuous banging of pots and pans to deter the unwanted guests. When the volume of the night-guarding reached its crescendo, they at last lifted their great heads. The shouts full of pleas, anger, despair and fear soon faded along with the satiated elephants and the scene darkened as the herd disappeared back into the thinly-treed jungle. Looking upon the faces of the villagers, I could see a range of expressions from fatigue and frustration to excitement and ambivalent resignation—a sign of too many nights spent the same way. The scene reminded me of why I was there: to research how these and similar interactions affect peoples’ lives. The questions at hand that night were: how do people tolerate this, what can’t they tolerate and how can they carry on?

The only visible member of a herd we passed as we walked from one village to another.

The scenario I witnessed that night is common, occurring in places where humans and animals share spaces, and is often described as human–wildlife conflict or sometimes coexistence. It is an area of intense research in conservation, particularly as the frequency of such interactions increases. In our study, we asked 243 people about their struggles with day-to-day life. It was clear everyone had experienced costs associated with living in such close proximity to elephants. We initially thought that direct costs, such as losing a rice crop or suffering damage to their houses, would severely erode the economically poor farmers’ capacity to accept the elephants’ presence.

Anwar Palash (co-author) listening to a story of how elephants are perceived to behave.

However, we found that this was not the case, and that tangible damage costs (including the loss of life or injuries) didn’t shape their tolerance of the elephants. We discuss why in our article, but some clues can be surmised from one interviewee who argued, ‘If a child drowns you don’t blame or hurt the water, so how could you want to hurt an elephant if it was the reason the child died,’ hinting at a fatalistic acceptance. Furthermore, this understanding was twinned with a sympathy for the elephants: as they face decreasing availability of food, their visits to villages become inevitable. Instead of direct costs dominating the villagers’ experience, it was more the intangible costs that grated at their capacity for tolerance: fatigue from night-guarding, fear and stress from elephant visitations, and children missing school. 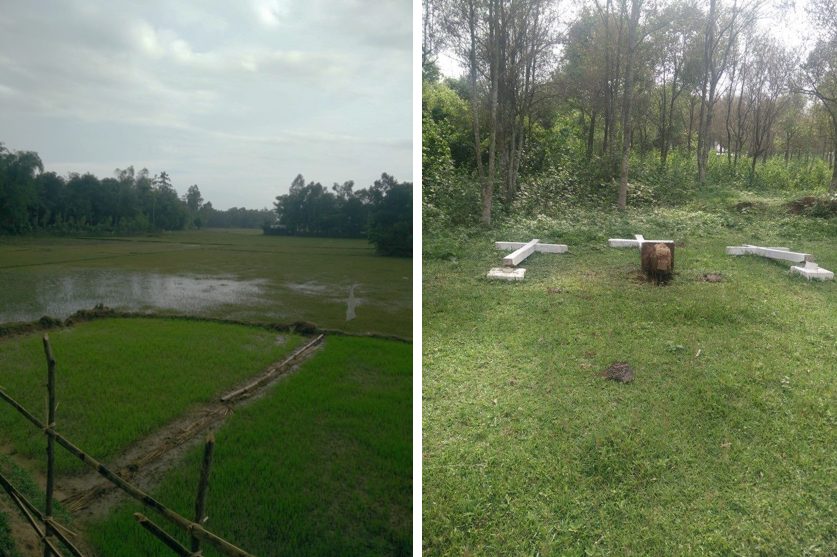 Left: The paddy field described in the story where the elephants visited late in the night. Right: Graves from a Garo Christian village damaged by elephants.

In our article, we assert that conservation policy needs to be sensitive to more covert costs and, furthermore, that the rural poor on the peripheries should not be expected to safeguard biodiversity and protect their livelihoods simultaneously. In our globalized world, far-reaching politics (in which the villagers play little part) is intensifying their interactions with animals, pushing previously manageable human–nature relationships out of balance. These are also conclusions I have arrived at long after the study was completed.

If I could do it again, I would have sought to understand how the local villagers were affected by these power imbalances, applying a political ecology lens that examines how environmental change and concomitant conflicts are unfairly distributed, with winners and losers decided by those with economic and political power. This would also have informed me of how the local social forestry programme, initiated by an international financial institution, promoted deforestation of native trees in favour of fast-growing Sal forests for timber, to generate economic returns at the expense of local people and elephants. Paying more attention to the social difference in gendered experiences of tolerance would have also strengthened the analysis.

Lastly, I reflect on the unequal power relationships that allowed me as a western researcher to conduct research and then leave. I have kept in contact with some of the villagers and communicated with relevant policy officials where possible, but although this piece of research has helped further my career, it is unlikely they benefited from my presence. I now carry political ecology and decoloniality in my research toolkit, which help ask how wider political-economic structures affect the local, question what rights I have to undertake research and what, with my privilege, I should offer.

The article Costs of coexistence: understanding the drivers of tolerance towards Asian elephants Elephas maximus in rural Bangladesh is available in Oryx—The International Journal of Conservation.

Omar Saif is a PhD Candidate in the School of Geosciences at the University of Edinburgh, where he researches how conservation organizations work in everyday practice and the challenges practitioners face in how they meet multiple accountabilities, with a present focus on Nepal. His wider approach is to recognize the value of different knowledges and seeks to bridge conservation science and political ecology through the concepts of trust, justice and empathy. Omar is a member of the IUCN Asian Elephant Specialist Group.